The plan was called to an end after the war broke out in 1937 and shanghai was occupied by Japanese military force. Shanghai went through another period of urban transformation under the government of Japanese military force. This time the urban planning was mainly served for military purpose from the Japanese intruders’ perspective. The plan was sort of originated from the Greater Shanghai Plan. The motivation for the new urban planning was to bring back the prosperity in Shanghai city center where the Japanese troops occupied. The foreign settlement, however, was out of their reach. Capital and refugees fluxed into foreign settlement areas which made the area even more prosperous. In order to compete with the foreign settlement, developing Shanghai city center was still in the first place.[1] The Greater Shanghai Plan was yet feasible and beneficial to the Japanese troops. Moreover, within the previous plan, the construction of Deep water pier in Woo-Sung port and military airport in Jiangwan was also crucial. Basically, what had planned in the Greater Shanghai Plan was carried on in the later planning. All in all, the plan focused on the development of new town and infrastructure construction.

After the World War II, the Japanese military force retrieved from Shanghai and the new plan called the Greater Shanghai Urban plan (大上海都市计划) was made by the city planning board. However, because of the broke out of civil war in 1946[2] and the heavy burden in the post-war period, the government wasn’t able to fully implement the plan. However, the plan referenced the ideologies in the Greater London Plan made by Patrick Abercrombie and absorbed other western theories. In the Greater London Plan, 8 satellite cities in the suburb areas alleviated the congestion in city center.[3] The zoning strategy was also applied to the plan. 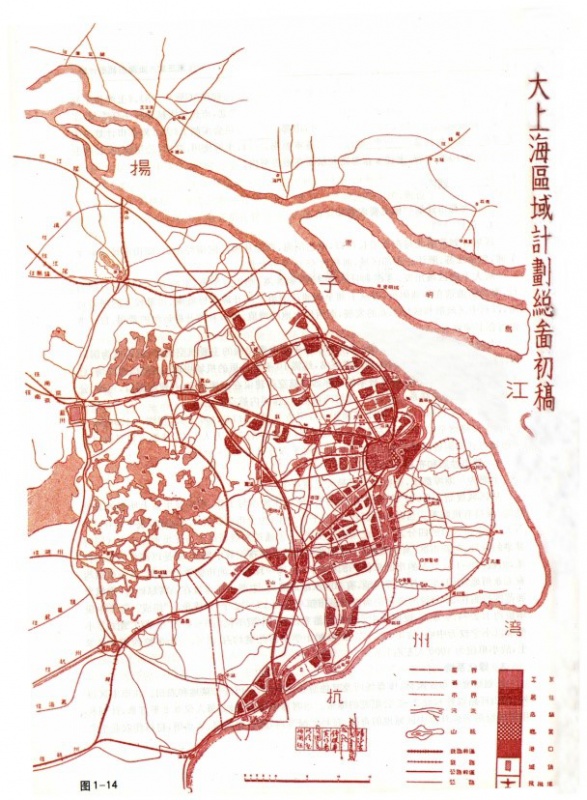 The first draft of the Greater Shanghai Plan in 1946 （大上海都市计划）

The Greater Shanghai Plan deeply influenced the urban planning strategy of Chinese cities. The plan reflected that during the Republic of China era, the top-down way of urban renewal was highly controlled by the city government. Architecture form and urban planning was highly connected with state will. The personal likes and dislikes of the authority determines the urban form. The plan explored an urban developing method that led and carried out by the government. Government force was the main factor in achieving the city development. The entire process was controlled by the minorities and reflected the will of city government. The urban planning power was contained within city center construction council and town hall meeting. Public could not supervise either the financial plan nor the cash flow. It’s possible that the government was able to build up its image among the general public and be beneficial from the plan through land speculation. The strong political motivation was expressed at the beginning of the plan. The effort on constructing administration center weighted far more than the development of port and railway station. Neither did the government made substantial effort on boosting the economy development.